The State of Alaska is preparing a request to the SBA for them to declare an Economic Injury Disaster pertaining to the Bering Sea and Bristol Bay crab fishery closures. This disaster declaration would open up the SBA Economic Injury Disaster Loan (EIDL) program to affected businesses. The EIDL is a low interest loan program that would allow businesses in the affected areas to apply for a loan to help bridge any business expenses they would’ve otherwise been able to pay had the fishery not closed.

The first step in this process is to identify the “disaster area”. Grace Beaujean from DCRA worked with ADF&G on initial identification of the areas of the state affected by the crab fishery closure.

These are the 3 SWAMC areas where we need to collect 1 acceptable worksheet each:

The SBA and DCCED have requested the help of the ARDOR’s to help get the needed information for the declaration.  Please forward or make public this request to all of your local business and fisheries organizations.  I would also recommend that an announcement be provided on your local radio station, local paper or community news board.

I would suggest that any company who will realize financial losses due to the closure of the Bering Sea and/or the Bristol Bay Red King fisheries complete the Economic Injury Worksheet and submit it to laura.vaught@Alaska.gov by the end of December.

DCCED is not sure of the timing for the SBA application deadline, so until that is determined please get your application in as soon as you can.  The applications will only show need for the SBA to open the EIDL program to affected business and fishermen, it is not to determine who gets the loans or not.  Without showing that there is a need in our region (and we are the most significantly affected region) the declaration may not be made.  I assume that there will be far more than 5 worksheets from these three regions submitted, and that will be helpful. I have sent this out to multiple stakeholders, but there are many more who do not provide email addresses to a manager/owner or operator.

Please contact me with any questions you may have, and I will get back to you as soon as I can.  This is a rare opportunity to quickly access a long-term, low interest loan to keep your business afloat in the next year.  The worksheet is simple and easy to fill out.

Posted by Ernie Weiss at 3:34 PM No comments:

Community Meetings with Alaska Board of Fisheries Today and Tomorrow

There will be a Sand Point community meeting Friday July 8th at 1PM in the AEB office building with Board of Fish members John Wood and Marit Carlson-Van Dort.

There will be a King Cove community meeting Saturday July 9th at 1PM in the AEB office building also with Board of Fish members Marit Carlson-Van Dort and John Wood.

Please come to a community meeting to welcome & talk with these Board members.

Posted by Ernie Weiss at 8:55 AM No comments:

Posted by Ernie Weiss at 5:06 PM No comments:

January 7, 2022 (Anchorage) – Today, Governor Mike Dunleavy released the list of eleven Alaskans who will serve on the Alaska Bycatch Review Task Force. The mission of the task force is to better understand the unintended bycatch of fish such as halibut and salmon caught in both State and federal waters. The two remaining seats on the task force will be non-voting seats filled by members of the Alaska Legislature.

“While Alaska’s healthy and sustainable fisheries are an example for the entire world to follow, bycatch has remained a contentious issue of concern of all Alaskans,” said Governor Dunleavy. “The 11 Alaskans who stepped forward to serve on the Alaska Bycatch Review Task Force represent key stakeholder groups and are recognized for not only their knowledge of fisheries, but their commitment to sustaining the resource for generations of Alaskans to come.”

The Governor’s appointees are:

John Jensen, Chair – Mr. Jensen has over a half century of experience in Alaska’s commercial fishing industry. He is serving his seventh term on the Alaska Board of Fisheries and was appointed to the North Pacific Fisheries Management Council in 2018.

Tommy Sheridan, Vice-chair – Mr. Sheridan will hold the public member seat on the task force and fills the role of vice-chair. He is the owner of Sheridan Consulting and is a member of the North Pacific Anadromous Fish Commission.

Brian Gabriel – Mr. Gabriel has served as mayor of the City of Kenai since 2016 and previously held a seat on the city council for six years.

Linda Kozak – Ms. Kozak occupies the halibut fisher seat in addition to running a fisheries consulting service. She also serves on the board of United Fishermen of Alaska.

Raymond May – Filling the salmon fisher seat is Mr. Raymond May. He owns and operates a commercial fishing vessel out of Kodiak Island, and is a council member for the Native Village of Port Lions.

Erik Velsko – Mr. Velsko will occupy the seat reserved for a crab fisherman. He has worked as a commercial fisherman in Alaska since 1997 and is a member of the North Pacific Fisheries Management Council Advisory Panel.

Mike Flores – Mr. Flores has owned and operated a sport fishing charter business in Ninilchik since 1994. He is also a board member on the State of Alaska’s Big Game Commercial Services Board.

Stephanie Madsen – Ms. Madsen is the Executive Director for the At-Sea Processors Association.

Kevin Delaney – Mr. Delaney is the founder of Delaney Outdoors, a fisheries consulting firm he opened in 2010. He was the director for the Division of Sport Fish, Alaska Department of Fish and Game from 2005 to 2010.

Duncan Fields – Mr. Duncan fills the seat reserved for an organization representing Alaska Natives. He is a long-time resident of Kodiak Island and owns a consulting firm that represents two Native corporations.

Governor Dunleavy has tasked the group to study the following areas:

Posted by Ernie Weiss at 4:30 PM No comments:

Projects in the Field: Data Modernization in the Western Gulf of Alaska By Charlotte Levy

Projects in the Field: Data Modernization in the Western Gulf of Alaska

Posted by Ernie Weiss at 9:35 AM No comments: 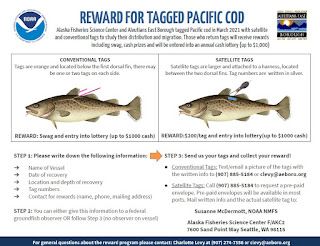 Posted by Ernie Weiss at 9:08 AM No comments: