AEB Gets a Win at the Board of Fish 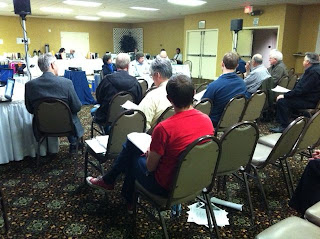 AEB fishermen got their sought-after language in the adopted Alaska Board of Fisheries motion, which will coordinate the opening of the state Pacific cod fishery with the closure of the soon-to-be implemented gear sector split federal fishery. The Board of Fish meeting began Thursday, Oct. 6, 2011. The Board took action on the South Alaska Peninsula proposals on Sunday, Oct. 9, 2011.

The Board also formalized the de facto jig allocation to 15% of the quota. The board at first turned down an amendment by Sue Jeffery to institute the 15 % allocation. However, it later became apparent that other sections of the proposed regulation referenced the jig guideline harvest level (GHL), so they needed to specify it. Until now, the regulations have only indicated the pot sector allocation at 85% in the South Alaska Peninsula Pacific cod plan.

Ernie Weiss, Sam Cotten and area fishermen Melvin Larsen, Gary Mack and Raymond Nutt were all at the meetings discussing the issues with Board members and participating in the committee and the Board process.
Posted by Laura Tanis at 12:50 PM