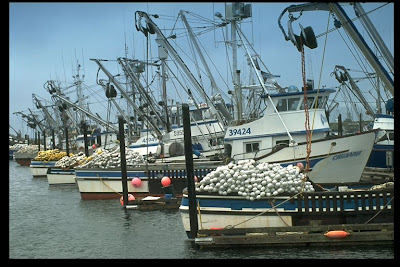 Sand Point, AK – June 7, 2010 – The purse seine fleet in Sand Point and King Cove has decided to stand down this week during the first sockeye salmon opening for 2010 in Area M. The Area M fishery is located around Alaska’s Eastern Aleutian Islands and Western Peninsula on the North Pacific Ocean and Bering Sea. The first opening began today at 6 a.m. (June 7, 2010) and ends at 10 p.m. on June 10, 2010.

Chum salmon is a controversial issue. Although existing data indicates that the chum salmon catch during the Area M fishery has only a small impact on A-Y-K (Arctic Yukon Kuskokwim) chums, many residents living in the A-Y-K believe otherwise.

During two separate meetings late last week, Area M fishermen debated what action they might take in response to A-Y-K chum concerns. Seine vessel captains gathered in Sand Point City Council Chambers and at the harbor house in King Cove last Thursday and Friday evening while they hashed out their options for several hours. Their final decision was based on high amounts of chum caught during the subsistence harvest. Giving up fishing time after a long winter is a difficult decision.

“My husband is sitting on the beach right now,” said Sand Point resident Tina Anderson, “and that’s lost income to my family.”

However, the Area M fleet has learned that as long as A-Y-K residents and the Alaska Board of Fisheries believe Area M’s fishery is having a serious impact on their runs, the fleet in the Aleutians East region is under great political scrutiny.

“Area M seiners recognize the concerns of residents living in the A-Y-K (Arctic Yukon Kuskokwim region) who believe we’re catching high numbers of chums,” said Glen Gardner, Jr., a seiner and the Mayor of the City of Sand Point. “We view our stand down as a positive gesture of solidarity.”

“We’re all fishermen who feed our families and make our living in Alaska waters,” said Sand Point seiner Robin Larsen. “Our fleets are also primarily Alaska Natives. We are sympathetic to the plight of families in the A-Y-K.”

For decades, Area M fishermen have been plagued by accusations that they are affecting commercial and subsistence chum salmon runs in the A-Y-K. In 2001, the Alaska Board of Fisheries implemented severe restrictions which nearly bankrupted the entire Area M fishing fleet. The fishermen lost nearly 70 percent of their fishing time. However, scientific evidence shows that the Area M sockeye salmon fishery has very little impact on the chum salmon stock.

Impacts were so severe that by 2002, the Aleutians East region’s poverty rates skyrocketed. Fishermen lost their boats and permits. In 2004, the Board of Fisheries lifted the restrictions to pre-2001 levels after finding no evidence that previous chum salmon fishing restrictions made any improvement in chum runs in the A-Y-K.

“Local fishermen still fear they may lose the time they got back,” said Sand Point resident and fisherman Melvin Larsen. “So we’re trying to be proactive about this controversial issue.”

“We are active supporters of the scientific effort to genetically identify the stocks of chum present in our fishery,” said Raymond Koso, Jr. “That effort is currently under way. But until that work is done, any conclusions are just speculation at best.”

“We can’t do anything about the chum runs in the A-Y-K,” Mayor Gardner added. “But what we can do is show support for our neighbors to the northwest by standing down during the first run of the salmon season.”